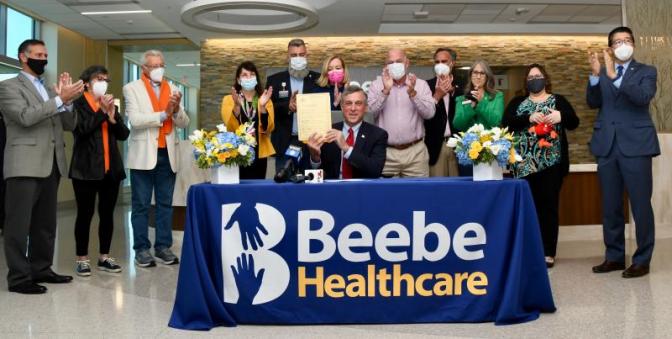 Since the start of state legislative sessions in January, Voices for Kidney Health advocates have worked with lawmakers to pass Living Donor Protection Act (LDPA) legislation in eight new states, prohibiting life, long-term care, and disability insurers in those states from discriminating against living organ donors. Governors in Delaware, Georgia, Florida, Nebraska, Ohio, and Virginia have already signed their LDPAs into law, while LDPA bills in Louisiana and Minnesota currently await gubernatorial action. Once these bills are signed into law by Governors Edwards and Walz, respectively, it will bring the nationwide count for LDPAs to 28 states and help ensure more prospective donors consider giving the gift of life, safe in the knowledge that they won’t face discrimination if they do so.

NKF advocates played a critical role in securing these policy wins on behalf of the kidney community. Two such advocates are Charles and Patricia Harvey, a married couple from Lewes, Delaware. The Harveys were having a difficult time obtaining affordable insurance for Patricia following her kidney donation to her husband eight years ago. The couple would soon discover that this struggle is commonplace for living organ donors and the practice of discrimination was legal in the state of Delaware.

Alarmed by this discovery, the Harveys contact Delaware state Senator Ernie Lopez. With bipartisan support from Representative Steve Smyk and Speaker of the House Pete Schwartzkopf, Senator Lopez introduced SB 218, the LDPA. Every member of the Delaware senate signed on as a cosponsor of SB 218, and the LDPA passed through the legislature unanimously less than a month after introduction. Charles and Patricia were present when Delaware Governor John Carney signed the LDPA into law in April.

Like Patricia Harvey, Jen Anderson of Minnesota is a living organ donor. A strong advocate and health professional herself, Jen has been working with NKF to get LDPA legislation passed in Minnesota for several years. During the 2022 legislative session, Jen testified before numerous committees in support of the LDPA. “By reducing barriers kidney donors face, we can increase the number of living donors and decrease health care spending” she explained during a House Commerce Committee hearing in March.

The Minnesota LDPA also had the benefit of a strong champion in the legislature. Representative Kaohly Vang Her was diagnosed with kidney disease as a teenager and will eventually require a kidney transplant to live. Rep. She agreed to introduce the LDPA in the House and testified alongside Jen in committee hearings. Their advocacy would ultimately pay off – the Minnesota legislature passed the LDPA on the second-to-last day of the legislative session.

Gary Bodenheimer is an NKF advocate and kidney patient who has been working on LDPA legislation in his home state of Nebraska for two years. His testimony during a February Banking, Commerce and Insurance committee hearing commanded the room and drew questions from state Senators. When the original LDPA bill didn’t move independently, Gary worked with the bill’s sponsor to get the LDPA language amended into a large Banking, Commerce, and Insurance committee bill. That bill passed on April 12th and was officially signed into law on April 20th.

NKF advocates and staff have worked tirelessly to support legislation that serves the kidney community in states across the country. We hope to use the current momentum at the state level to garner support for a federal version of the LDPA and in additional states where discrimination against living organ donors is still legal. If you’re interested in advocating for kidney health policy in your state or want to receive advocacy updates from us, sign up here! Every voice for kidney health can make a huge difference.