How Jason Found a Silver Lining in Kidney Failure 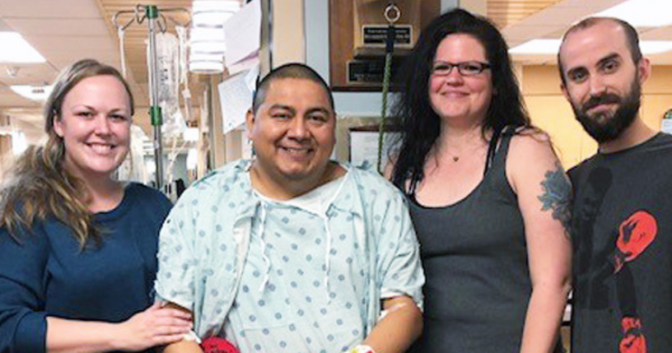 A surprise diagnosis of focal segmental glomerulosclerosis and stage 5 kidney disease flipped Jason's life upside down, but it also helped change his entire outlook on life. This is how he found the courage to ask for support, accept help, and find a silver lining in these challenging circumstances.

When Dana, Jason's wife, first suggested getting a routine physical, he shrugged her off. He was extremely busy at work and felt like he was in the best shape of his life - what was the point?

Little did he know that her persistence would save his life. Two days after the appointment, he learned that he had kidney failure and needed to start dialysis immediately.

"We now say nagging wives save lives," Jason joked before turning serious, "I basically had stage five kidney failure just like that. Our whole world felt like the carpet had just been thrown from underneath us and I was in denial."

Distressed, fearful, and struggling to accept his diagnosis, Jason didn’t know what to do next.

Dana took matters into her own hands.

The power of community

Dana first reached out to their family members and friends, who began sharing Jason's story with their own networks. At first, Jason was ashamed that he needed help and avoided asking for it, but Dana's efforts showed how willing people were to help and changed his mind.

"I think as human beings, we feel like we're taking everything on by ourselves. Don't be ashamed to ask for help. Your family and friends love you." Jason said, "Anyone can help but you need to share your story so that they in turn can share with their individual network of family and friends."

Knowing that people had his back, Jason felt comfortable sharing his story with coworkers who sent a company-wide email detailing his fight and asking for help.

"I feel like they all supported me. Everybody either tried to get registered to be a donor or they asked how they could help," Jason said, "We had several scenarios where I would drive downtown and see somebody with my awareness magnet. I had no idea who they were. It was very powerful."

If you aren't sure how to find a living donor, we can help!

After discussing with her husband, Christie got tested to see if she matched Jason. Luckily she did, and everything moved quickly after that. A few weeks later, they met for the first time in person.

"All four of us were just right there," Jason said, "big hugs, nothing but love."

Jason was grateful for Christie but worried about his body rejecting the new kidney. Thankfully, the surgery went smoothly, and his transplanted kidney is still going strong.

Dealing with the aftermath of kidney failure

Jason assumed that his anxiety would disappear after he recovered from the transplant surgery, but he continued to deal with negative feelings. One day, he was healthy, and the next, he was fighting for his life. It's a hard thing to wrap your mind around.

"It's very traumatic and I'm actually working through some of that stuff right now, even three years later," said Jason, "It really forced me to take better care of myself."

Admitting you need help is often the first and hardest step to feeling better, but Jason isn't sure where he would be without the support. It’s changed his life for the better as he’s more focused than ever on his physical and mental wellbeing.

Now he takes the time to:

"Kidney failure really did change my whole outlook on a lot of things. It helped me refocus. Prior to all this, I was a workaholic. I wanted to work all the time," Jason said. "Now, I want to make sure that I'm spending time being in the moment with my family and not taking things for granted. These are things that I would have never done prior but now it's like those moments are what make me happy."

Do you want to become an altruistic donor like Christie? Here's where to start.


In 1984, Bernadine (Dine) Watson was feeling gloomy, exhausted, and suffering from intermittent joint pain. However, as a working mom going through a divorce, she attr...