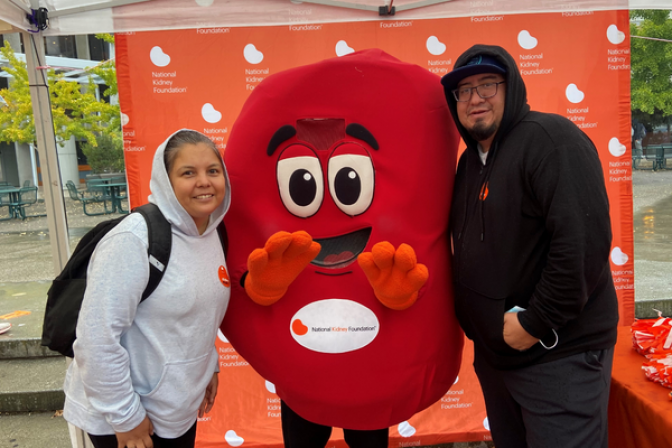 Elizabeth Archuleta had trouble controlling her bladder as a child, but healthcare professionals believed she would grow out of it. Unfortunately, she did not. As she aged, her bladder issues resulted in consistent and painful urinary tract infections (UTIs) that left Elizabeth hospitalized in 2008.

During the hospital stay, doctors performed a CT scan but couldn't find a reason why Elizabeth had recurring UTIs. They found protein in her urine, an early indicator of kidney problems. At first, they believed she might only have one kidney but referred her to a nephrologist for a second opinion.

The nephrologist informed Elizabeth that she had early-stage kidney disease but couldn't determine a cause before the insurance company kicked her off her plan. Before the Affordable Care Act, insurance companies could deny coverage based on preexisting conditions.

"I was diagnosed with insurance and then I was kicked off it," Elizabeth said. "Being newly diagnosed with an unfamiliar condition but not knowing what caused it was really challenging for me.”

As Elizabeth attempted to navigate low-income insurance, she did her best to eat healthily and exercise. She also visited low-cost health clinics in the area, where she received various misdiagnoses, including having an enlarged kidney doing the work for both.

When the Affordable Care Act passed in 2010, Elizabeth received healthcare insurance and got on a waitlist to be seen by some of the best professionals in her city.

"I got an ultrasound and a kidney biopsy that showed I had FSGS kidney disease," said Elizabeth. "My ureters are very narrow and they're prone to backsplash which is why I was getting so many UTIs. I managed my pain with ibuprofen, potentially causing more damage to my kidneys."

"The doctors prescribed medication to hopefully cut down the protein leaking into my urine," Elizabeth said. "They were monitoring me and I had doctor's appointments every five to six months."

Sadly, Elizabeth's doctors informed her in early 2021 that her kidney function was again declining and suggested she look at her options:

"I made an appointment with the transplant center and met with a panel of doctors who added me to the transplant list in April 2021," said Elizabeth. "I was told that if any family members, friends, or a stranger would like to donate a kidney to me, I needed to give them a link.”

Elizabeth asked around, but no one could donate, so she figured it would take 7 to 10 years for a kidney–the average wait time in California. While Elizabeth was okay with the wait time, her mother was not.

"My mom decided to ask if she would be a good candidate to donate a kidney to me," Elizabeth said. "My doctor told her that since I was in my thirties and she was almost in her sixties, her kidney wouldn’t have the lifespan needed for a successful surgery. '"

Elizabeth's mother could donate even if she was not a perfect candidate. They asked the transplant center team what to do and were introduced to a paired kidney exchange program that allows donors to "swap" kidneys with other compatible recipients on the waitlist.

"They have an exchange program where she can donate to somebody her age and then I can get it from their family member or friend who is my age within three weeks. I just have to let the transplant center know when I'm ready," said Elizabeth.

Elizabeth’s mother donated her kidney in May 2022 and is doing extremely well–Not only did Elizabeth's mother give this life-changing gift, but she also busted kidney donation myths in the process.

"A lot of family members were skeptical and others needed a transplant so they asked her a lot of questions," said Elizabeth. "She's been good at clearing things up saying, 'I don't have any complications. I'm doing very well, I eat the same things that I love to eat, and I'm doing the same exercises. There's nothing wrong with giving an organ to somebody.' She made the more skeptical people willing to donate."

Now Elizabeth can enjoy her upcoming wedding and dream honeymoon without worrying about finding a kidney when the time comes.

Considering becoming a living kidney donor? Sign up for Becoming a Living Donor, our self-paced online class designed to teach you everything you need to know about donating a kidney.

Do you have a unique or inspiring story about your experience with a kidney transplant, living donation, or kidney disease? Share it with us. Your story may be the one that gives someone hope.


In 1984, Bernardine (Dine) Watson was feeling gloomy, exhausted, and suffering from intermittent joint pain. However, as a working mom going through a divorce, she att...

FSGS Can’t Stop Audra: “I Have More on My Journey”


Prior to 2006, Audra Skibo was dealing with mysterious health problems. At first, doctors believed it was multiple sclerosis or another disease that attacks the muscle...