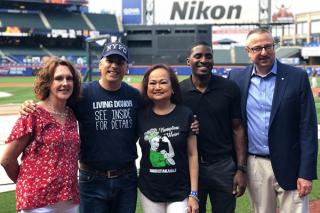 As a 20-year veteran of the New York Police Department, Detective Michael Lollo, 46, might already be considered a hero. But the label was solidified when he decided to give one of his kidneys to a stranger.
Michael was inspired when he heard a story about a man who posted on a giant billboard a desperate request for anyone willing to donate their kidney to spare him a life on dialysis. Most people don’t resort to such measures and so it was a longshot. Nevertheless, Michael was moved when he saw it and decided to answer the call and signed up to be evaluated as a donor.
Sadly, testing revealed that Michael wasn’t a match for the stranger on the billboard, but it did show that Michael could be a donor for someone else on the kidney waitlist. An anonymous mother in Maryland was in need, and Michael went through with the donation for this woman he had never met. On Dec. 19, 2019, his left kidney was surgically removed for transplantation and Michael became her hero.
“What you do on this earth matters,” said Michael, a husband and father of three children. “You can change the world for someone if you have the courage to try.” Michael said despite the rigorous tests and month-long recovery, he would “one million times over” do it again and “absolutely” recommends that others consider making the life-saving gift.
“I want people to know that they can do it too,” he said. “I want them to see me or hear me talk and say ‘Wow, that guy’s life seems better after donating’.” That wish seems to have come true, because since Michael has made the gift and spoken about his story, two other police officers have contacted him to get advice on how to become a donor for a stranger in need.
According to Michael, he never really thought about kidney donation or kidney disease before he decided to do it. He didn’t know anyone who had made an organ donation or understood kidney disease. “Most people were shocked by the news and maybe even confused,” he said. But, “my wife and kids were very supportive.”
In July, Michael was able to meet the recipient of his life-saving donation at Citi Field during a Mets game. It turned out, the mother from Maryland was also a Mets fan. When they first met, she was crying, he said.
“She gave me a forever lasting hug and said, ‘Thank you,’” he said. “It was emotional.”
Finding a kidney for those in need is very difficult and most people on the list wait for an average of five years for a transplant. Patients who find a living donor on their own can speed up the process to receive a kidney transplant, so patients are encouraged to learn more about living donation.
The National Kidney Foundation offers THE BIG ASK: THE BIG GIVE (BABG) platform, which is designed to increase kidney transplantation and living donation. BABG includes in-person trainings, direct patient and caregiver support through our toll-free help line 855-NKF-CARES, peer mentoring from a fellow kidney patient or a living donor, online communities, an advocacy campaign to remove barriers to donation, and a multi-media public awareness campaign.