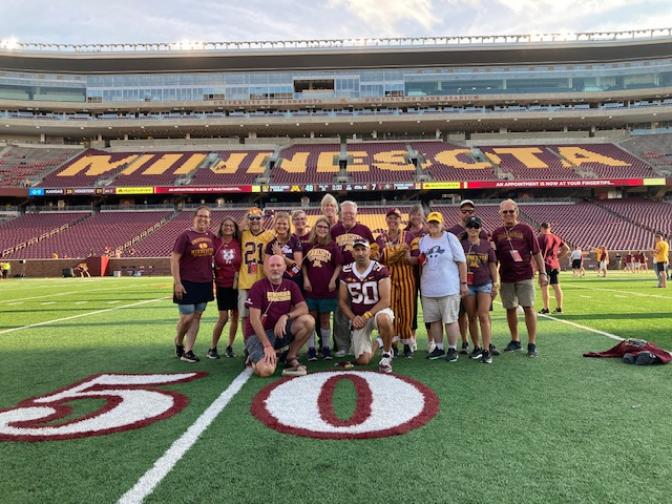 There are many ways to describe fifty-year-old Doobie Kurus. Pre-school teacher. Husband and father of three girls. Athlete and former Gopher football player. A chef who has raised over $250,000 for local charities.

And a selfless kidney donor.

It’s the last of this list, kidney donor, that has heightened his appreciation for the former.

Humble by nature, Doobie doesn’t seem to consider either his kidney donation or his charitable acts remarkable, but they are. Over the course of his days, Doobie Kurus is changing and saving lives.

It began in October 2015, when a University of Minnesota alumni email raised Doobie’s concern for a former football teammate, Ed Hawthorne. Ed’s kidneys were failing, and he needed a kidney transplant.

Although Doobie and Ed hadn’t seen each other in a decade, Doobie jumped into action. After consulting with his wife, he filled out an online form to learn about becoming Ed’s donor.

Doobie explains, “I thought what if I have the golden ticket and take it to my grave with me? I wouldn’t feel right if I saved my kidney, and it went to waste.”

After extensive testing, Doobie discovered he did indeed have the golden ticket.

“Ed had a lot of love,” Doobie said. “100 people volunteered. And I’m glad I was the one.” His act of kindness spared Ed the difficult and ongoing dialysis treatments required to keep him alive, absent a transplant.

Doobie is delighted his act of kindness restored his college buddy’s quality of life. And after giving this selfless gift, Doobie feels a boost in his quality of life as well. “I benefited too—this helped me wake up and appreciate my health and what I have.”

Later, after the surgeries, Doobie attended an event honoring living donors at the University of Minnesota. Doobie’s conversation with Ed’s mother at that event reminded him of the preciousness of time with loved ones.

Doobie lost his mother in 2009, the same year he lost his sister. He has also lost four uncles under the age of fifty from heart issues. (His mom’s brothers.) In 2019, his father passed away, and in 2020, Doobie’s brother died from Covid complications.

For a man who has endured an unfathomable series of losses, you might expect Doobie to be disheartened. Quite the opposite. Maybe in direct relation to the losses he’s endured, Doobie bursts with life—intent on savoring every minute, moment, and milestone.

That’s why, as Doobie approached his fiftieth birthday, he did not take it for granted. So, he planned a birthday tailgate celebration at the Gopher’s football game this past September 17th. With gusto, he partnered with M Health Fairview, Gopher Sports Marketing, KSTP, Fox 9, Star Tribune, and the National Kidney Foundation to raise awareness and dispel myths about organ donation.

And help others, he did. Doobie’s celebration of life raised energy, awareness, and funds for the National Kidney Foundation. Mission accomplished by a man intent on doing things he loves with the people he loves.

Doobie’s selfless gift to Ed keeps on giving exponentially, as Doobie spreads awareness about living donation to help the 100,000 people waiting on kidney transplant lists. Ultimately, Doobie’s advocacy for goodness exemplifies and illuminates the joy of living for all.