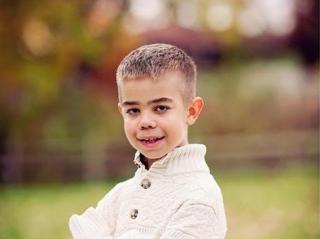 By Christi Krautbauer, NKF Board Member
Today we’d like to share another story of a family in Minnesota. Meet Amanda Weber and Scott Tienter, with their children Preston, Austin, Isabella and Lily.
You probably can’t tell from this picture, but this family has been through a lot! You see, when Amanda was only 20 weeks pregnant with Preston, doctors noticed a problem with Preston’s kidneys. From that point forward, Amanda had multiple ultrasounds each week, making sure that nothing was endangering her baby.
Fast forward to the 33rd week of her pregnancy, and things got even scarier. The ultrasound technician could not find any amniotic fluid. You see, amniotic fluid is primarily produced by the baby’s urine, and Preston’s kidneys were not producing enough. So it was time to induce labor.
Thankfully, babies born at 33 weeks have awesome chances of survival, and as Amanda says, “Preston was already going to fight and move mountains.” This little boy, born very early, weighed 6 pounds! In fact, his weight is probably one of the reasons he survived those early days.
Unfortunately, Preston had to be transferred to Children’s NICU and later to the U of M because of his kidney problems. Early on, doctors told Amanda and Scott to “enjoy every single day with their son, because the odds were that he would not make it to his first birthday.”
Preston underwent his first surgery at just 3 days old, and the next 14 months were primarily spent in the hospital. He was the first infant to be placed on peritenial dialysis at the U, and only the third pediatric patient to be able to go home on it! This little boy kept fighting.
Like the super-woman she is, Amanda determined that she would not bury her son. And when Preston was finally big enough (at 14 months old and 14 pounds), Amanda donated one of her kidneys to him.
For four years, Amanda’s kidney did an amazing job keeping Preston healthy. Unfortunately, around 5 years old, Preston’s kidney began showing signs of distress. And by the time he turned 10, doctors determined that his renal reflux was severely jeopardizing his kidney and his overall health.
By that point, Preston’s bladder was suffering, and he needed a complete bladder reconstruction surgery. And possibly more heartbreaking, he needed another kidney.
The family started the process of looking for a new donor. His doctors gave him a 3% chance of ever finding a donor because he had developed antibodies that made a match unlikely. Hundreds of people got tested to become Preston’s donor. But none of them was an acceptable match.
And in July of 2016, Preston had to start hemodialysis. In Amanda’s words: “It. Was. Horrendous.” The dialysis was so hard on her son, but she had to bring him every day, watching him cry for the last hours of treatment because his body was in so much pain. No mother ever wants to experience watching her child go through this, but it was also keeping him alive, and so Preston and Amanda continued their daily trek to dialysis.
Now remember that the doctors said Preston had a very slim chance of receiving a kidney, so dialysis was crucial. Unfortunately, shortly after starting dialysis, the family found out that it wasn’t working as well as it needed to. Preston had to receive a new kidney quickly if he was going to live.
And this is when the family received what Amanda refers to as their “early Christmas miracle.” In October, just 3 months after starting dialysis again, they found out that a kidney was available through a paired donation program. A chain of 9 kidney donor heros were going to make it possible for 9 kidney patients to get their new organs!
Preston’s kidney would come from Washington from an older donor, and they only had to wait until November 8 to get it!
November 8 came, and the family went to the hospital for Preston’s last dialysis treatment before his surgery. The transplant was completed successfully, and we’re very excited to announce that today, Preston’s new kidney is doing great!