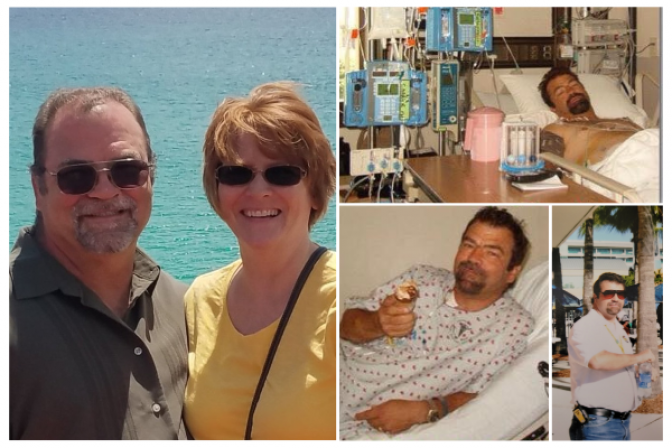 Tim, was an energetic, healthy 29-year-old sailor in the Navy when he suddenly collapsed and was rushed to the hospital. There, he received news that shocked him and turned his life upside down: He had kidney failure.

Tim's first hint that something was wrong were symptoms his doctor dismissed as the flu. Thinking nothing of it, Tim returned to work as usual. Unfortunately, it was his body letting him know his kidneys could no longer filter out toxins and extra fluid. It simply needed to shut down.

That was just the beginning. Doctors discovered signs that his kidneys had been failing for eight years. If Tim had known, it might have been possible to slow or stop the damage before it was too late.

"Nobody ever told him. He trusted that his doctors knew what they were doing. He never questioned his lab tests." said his wife, Shelly, "If someone had paid attention to the blood and protein in Tim's urine and his elevated blood pressure, his kidney failure may have been prolonged or possibly even stopped before it happened. Doctors get busy, and if they don't catch a lab value out of range, we have to advocate for ourselves or our loved ones and ask about it."

Living with kidney failure for 30 years

Regardless of the adversity, he faces every day like a true champion.

"Our lives revolve around our five grandchildren. We enjoy spending every minute with them that we can. We love to camp, travel, relax on the patio, and are together as much as we can. We don't let kidney failure and dialysis stop us." said Shelly, "This journey has been a long roller coaster ride with a lot of ups, downs, twists, and turns. We do our best to not let it control our lives. Instead, we control it. It's not an easy road by any means but it has made us stronger as a couple."

"I share with everyone I can that I'm doing the Challenge and why." Shelly said, "They can't believe it when I tell them that 33 miles represent 33% of US adults at risk of kidney disease. People have no idea that the number is that high. It gives me an opportunity to educate them about kidney health."

We're challenging you to do the same! Whether you're joining for yourself or to honor a loved one, walk or run 33 miles this June and share your progress with other Challengers in the Facebook group. Not enough people are aware of their risk for kidney disease, but with every step you take and dollar you raise, you can help us change those numbers.

Join the group and create your Challenge fundraiser.