Two Lives Saved by One Kidney 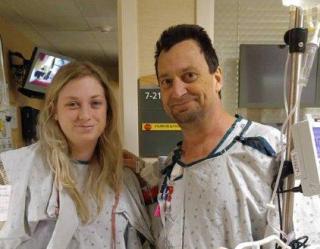 By Christi Krautbauer, NKF Board member
Did you know that in 2016, kidney transplants saved more than 19,000 lives? Of course each of these transplants profoundly impacted the recipients, but in some cases, more than one life is saved. In fact, that’s exactly what happened with the Hansen family.
Perry Hansen was diagnosed with kidney failure as a result of ANCA vasculitis in 2015, and started dialysis in 2016. When it became clear that Perry would need a kidney transplant, many of his friends and family members were tested to see if they matched.
One of those family members was Perry’s brother Paul. In the process of being tested to donate his kidney, Paul discovered that he had prostate cancer. Paul wasn’t experiencing symptoms from the cancer, and it’s only because of the kidney donation screening that he discovered it. Today, Paul has been treated and is cancer free. So the search for Perry’s kidney donor actually saved Paul’s, life too!
But what about Perry?
Paul’s daughter Kirsten also underwent the testing process and was a good match! Kirsten saved Perry’s life on January 5, 2017, and they are both doing very well today. Perry says that he feels blessed to have a second chance at life, is enjoying every day to its fullest and will look forward to helping others with kidney disease.
Here are a few more things the Hansen family wishes everyone knew about the kidney transplant process: