Home » A to Z » Nephropathic Cystinosis 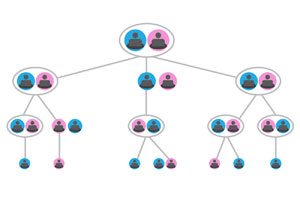 Cystinosis is a disease caused by an abnormal buildup of a certain amino acid called cystine. It is a rare, but serious disease with a lifelong impact, and can affect many parts of the body.

Cystinosis is an inherited disease, meaning that it is passed down through families. A faulty gene for the protein cystinosin leads to problems with the way cystine is stored in the body. Cystinosis is a recessive genetic disorder and patients must receive an abnormal copy of the cystinosin gene from each parent in order to develop the disease. In people with cystinosis, a buildup of cystine can lead to the formation of crystals. Cystinosis can impact many parts of the body, including the eyes, muscles, brain, heart, white blood cells, thyroid, and pancreas. Cystinosis can also cause serious problems with the kidneys.

There are three types of cystinosis, depending on when symptoms first appear (known as onset): Infantile (early-onset) cystinosis; later childhood or adolescent (late-onset) cystinosis; or adult cystinosis. About 95% of patients with cystinosis have the infantile/early-onset form, making it the most common variant of this disease, and most patients develop kidney problems.

Signs and Symptoms of Cytsinosis

Generally, early-onset cystinosis is the most serious form. Symptoms, complications, and timing of cystinosis can vary, depending on the type of disease.

Infants with cystinosis might have no noticeable symptoms at first. However, by 6 - 12 months of age, problems start to appear, including below-average growth, feeding intolerance (picky eating and/or fussiness), frequent urination, and periods of dehydration (constant thirst). One of the first organs affected by cystinosis is the thyroid gland and patients may need to be given thyroid hormone. Walking can also be delayed.

Infantile (early-onset) cystinosis is also called "nephropathic cystinosis," which is a term used because people with cystinosis can have serious problems with their kidneys. Infants with nephropathic cystinosis can develop a condition called "Fanconi syndrome," meaning their kidneys cannot absorb nutrients and minerals, such as sodium and potassium. As a result, these essential nutrients are lost in the urine. When infants become children, they are at high risk of developing worsening kidney disease, and eventually kidney failure, meaning the kidneys can no longer work. At that stage, dialysis or a kidney transplant is needed to survive. Without appropriate treatment, children with cystinosis can develop kidney failure by around 10 - 12 years of age.

Cystinosis can also cause other problems, including difficulty swallowing, muscle wasting, and weaker bones. People with cystinosis are also at higher risk for diabetes (high blood sugar).

Cystinosis can also impact the brain and nervous system. As a result, children and teenagers can also have problems with attention, memory, movement, and coordination.

Signs and symptoms appear at a later age. If left untreated, kidney failure can develop by the late teenage years or early adulthood. People with late-onset cystinosis can accumulate cysteine in their eyes and have problems with their vision and photophobia, meaning they are sensitive to light.

Cystinosis is diagnosed using different methods, including a physical exam to look for signs of the disease. The eyes will be examined to see if cystine crystals are present (signs of eye problems appear after two years of age). Personal and family medical histories will also be checked. A genetic test can also be used to help confirm a diagnosis.

Measuring the amount of cystine in white blood cells is one of the major tests for cystinosis. There are two tests that can be used to measure how well the kidneys are working. Blood and urine tests and radiology tests are also used to check how other organs are working.

Infants and young children with cystinosis might need to receive fluid and electrolytes, such as sodium and potassium. Vitamin D and phosphate salts might also be given for problems with weaker bones. Diabetes is usually managed with a low-sugar diet, insulin, or other medicines that help control sugar in the blood.

Infants and younger children with cystinosis might eventually need a kidney transplant if their kidneys are no longer working. People with a kidney transplant will need to take certain medicines, and do other important things to maintain their health.

There are also certain medications that can help lower the amount of cystine in the body, called "cystine-depleting" medicines. They can improve symptoms and help delay problems with the kidneys and other parts of the body. All people with cystinosis will need to take this medicine throughout their lives. There are new formulations of the medicine that can be given twice a day and that have less of a bad taste. Measuring the amount of cystine in white blood cells is used to find out how well these medicines are working.

With kidney transplantation, cystine therapy, and other medications, people with cystinosis today live longer into adulthood, provided they are treated early and appropriately. However, this disease has a lifelong impact, so it is important for people with cystinosis to keep up with their medical appointments and treatments. They also need to keep taking medications and stay with the treatment plan, as recommended by their healthcare provider.