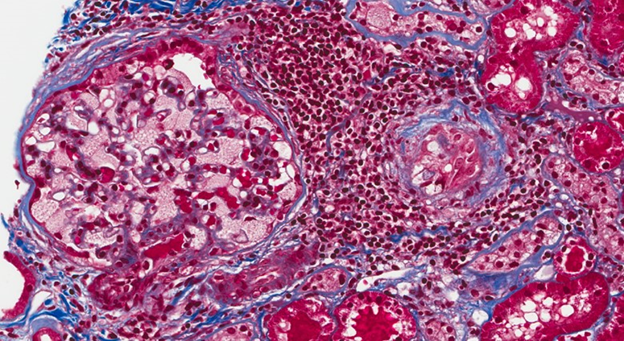 Fabry disease is a lysosomal storage disorder that results from absent or deficient activity of the enzyme α-galactosidase A (α-gal A), which is encoded by the GLA gene mapped to the long arm (Xq22.1 region) of the X chromosome.1,2 This enzyme breaks down the terminal galactosyl moieties in glycosphingolipids (complex sugar–fat substances). The enzymatic defect leads to accumulation, most predominantly, of the glycolipid globotriaosylceramide (GB3 or GL3) within lysosomes of certain cells in most organs.3,4 Deficient α-gal A activity can lead to a number of cascading cellular and tissue events, including cellular death, compromised energy metabolism, oxidative stress, inflammation, ischemia, hypertrophy, and the development of fibrosis, thus promoting cellular damage and progressive organ dysfunction, especially in the kidneys, heart and brain.2,5,6,7,8,9

Fabry disease is a multisystemic disorder, thus many cell types are affected, including vascular (endothelial and smooth muscle cells), cardiac (especially myocytes), renal (tubular and glomerular cells (especially podocytes), and nerve cells, leading to stigmata of the skin and eye and organ dysfunction of kidney, heart, brain, and peripheral nervous system (Table 1).3,10 The primary disease process starts during fetal development.2,11 However, most patients remain clinically asymptomatic during the very first years of life. If left untreated, the 'classic' form of Fabry disease leads, especially in males, to progressive multi-organ failure and premature death.

Signs and symptoms of Fabry disease can include skin lesions (angiokeratomas), pain and burning in the hands and feet (acroparaesthesia), fatigue, impaired sweating, and gastrointestinal problems. Corneal opacities that progress to a characteristic "whorled" pattern are found in the vast majority of hemizygotes, but generally do not impact vision. There is a high degree of clinical variability both among patients from the same family and among those from unrelated families with the same mutation. Many of these symptoms are observed during childhood and adolescence, and tend to be observed in hemizygous males. X-chromosome inactivation impacts the phenotype and natural history of Fabry disease in females.12 In heterozygous females, random X-inactivation may result in expression of α-gal A activity in the plasma or leucocytes within the normal range in up to 60% of women.3,13 Heterozygous females are not just asymptomatic carriers, and can develop either a partial or full spectrum of clinical manifestations associated with Fabry disease.14 Late onset/cardiac mutation variants of Fabry disease are typically milder and/or clinically restricted to heart disease.15

Kidney disease is a major complication of Fabry disease and is thought to be related to glycosphingolipid accumulation throughout the nephron.1 Clinical kidney disease has been reported in children as young as 16 years of age, but is more common in adult Fabry patients. By the age of 35 years about 50% of men and 20% of women with classic Fabry mutations have proteinuria in the presence of Fabry disease.1 GL3 accumulation in the kidney occurs preferentially in the glomeruli (especially podocytes but also in endothelial, mesangial, and parietal epithelial cells), distal tubular cells, and vascular smooth muscle cells. The predilection for podocytes and the correlation of podocyte GL3 accumulation and increased podocyte foot process width may explain the early renal manifestations of proteinuria.15,16 Within the glomerulus, the largest amount of lipid material is seen in podocytes, followed by the parietal epithelial, mesangial, and glomerular endothelial cells (Figures 1 and 2).17 Podocyte loss in the urine (podocyturia) is increased in patients with Fabry disease and correlates with the clinical severity of kidney disease, suggesting that podocyte loss may be important in the progression of Fabry nephropathy.16,18 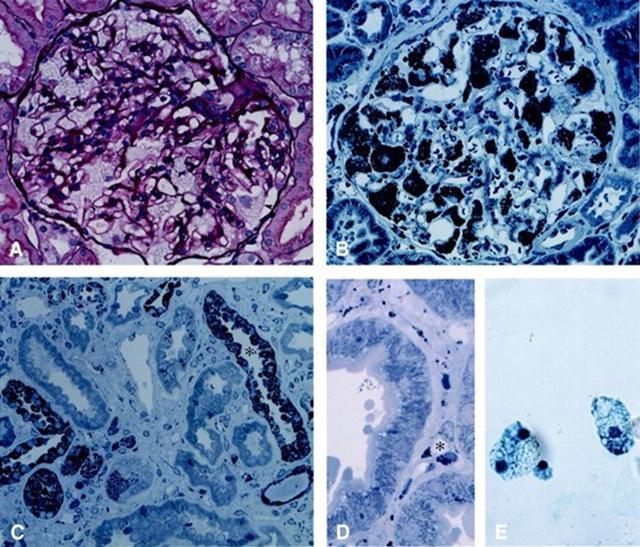 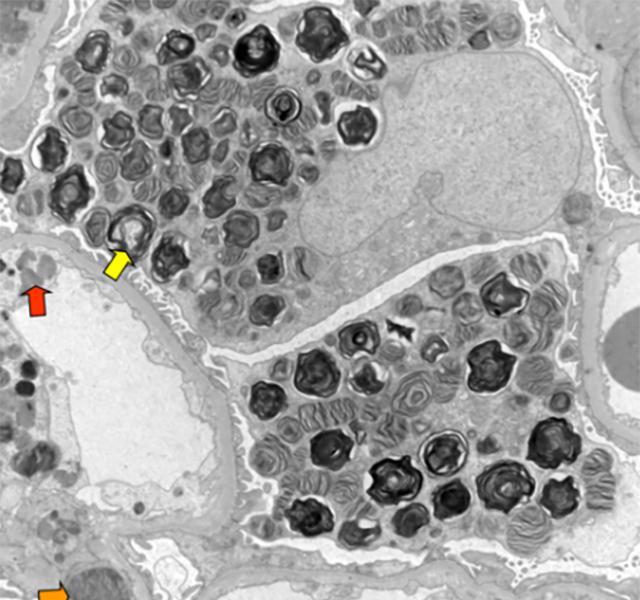 Onset of the signs and symptoms associated with Fabry disease should warrant prompt steps for diagnosis and intervention. Some features such as the corneal and skin changes are virtually diagnostic, especially with a positive family history, but laboratory confirmation is often needed. Also, observed signs and symptoms are heterogeneous among many patients, making timely diagnosis a challenge. In addition, some symptoms can resemble other more common diseases. Overall diagnostic delays have been estimated at ~15 years for both genders.2,19It is therefore important to begin with a comprehensive medical and family history, and to include Fabry disease in the differential diagnosis according to the hallmark clinical and familial features in Table 2.

Table 2: When to consider Fabry disease as a diagnosis*

An initial evaluation should consist of the following:16

Evaluation of family members should consist of the following:16

Appropriate biochemical and/or genetic confirmation could be considered for confirmation if physical and clinical examination raises a suspicion of Fabry disease (Figure 3).20,21 Assays of plasma alpha-galactosidase activity may be less sensitive than in leukocytes.3,22 Mutation analysis of the GLA gene is needed to diagnose females (unless the woman is an obligate heterozygote, i.e., the father is known to have Fabry disease), and in males and females with atypical presentations or marginal α-Gal A levels.4

*Standard sequencing of GLA will not detect large deletions, large duplications, some intronic mutations, and mutations  in the promoter or other regulatory regions. Results must be  interpreted in the context of an individual's clinical and/or biochemical profile. Laney D, et al. J Genet Counsel. 2013;22:555-564.5
Regular assessments of kidney function in Fabry patients should include glomerular filtration rate (GFR), urine albumin excretion.1,3,23 Generally, the diagnosis of early decline of GFR in patients with Fabry disease and chronic kidney disease (CKD) is hampered by inaccuracy of creatinine-based GFR measurements. Overestimation of true GFR may be especially relevant in many male Fabry patients. A baseline carefully done using measured GFR and serum creatinine can allow for better subsequent eGFR interpretations, especially with normal or near normal measured GFR. Fabry disease should be considered and tested in patients with CKD with no definitive cause of nephropathy and when no biopsy has been performed, especially in familial cases.3 The diagnosis is rarely made by skin or kidney biopsy, however, Fabry disease may be found incidentally if a kidney biopsy is performed to diagnose proteinuria CKD.16,24

Fabry disease patients experiencing neuropathic pain can benefit from avoiding any possible triggers of their acute pain attacks. Various medications have been recommended for pain management (Table 3).25,26,27,28,29,30,31 Certain antidepressants and anticonvulsants can be considered. Generally, studies agree upon starting the medication at low dose, and evaluating tolerability and effectiveness after 2-3 weeks.32 To reduce the likelihood of side-effects from polypharmacy, the dosage of each drug prescribed should be titrated to the highest tolerated dose providing significant pain control before other pain-modulating agents are added.25 Analgesics are also an option, but nonsteroidal anti-inflammatory drugs (NSAIDs) are generally not considered effective and can negatively impact kidney function.1,33 In addition, nonpharmacologic approaches including psychological and physical treatments have been proven effective in the relief of pain and the treatment of comorbid disorders including anxiety and depression.26,34

May interfere with activity of other drugs (e.g., warfarin)

Avoid due to risk of Arrythmias
Unknown

Cardiovascular complications account for the majority of deaths in Fabry disease.3,35,36 Heart failure may have multifactorial causes that need to be addressed. Hypertension is not common during earlier onset of Fabry disease and low blood pressure is considered more typical in this patient population.37 However, hypertension is more common as the renal disease progresses.1,38,39 Hypertension, along with LVH, is most strongly associated with cardiovascular events in Fabry disease patients.40 Hypertension should be managed when present. Many patients might not tolerate beta blockers.3 Angiotensin-converting enzyme (ACE) inhibitors or angiotensin receptor blockers (ARBs) can be considered, particularly in the presence of proteinuria, given their ability to act as antiproteinuric agents.1,40,23

Studies have shown that ERT with agalsidase beta normalizes GL3 levels in a multiple organs and tissues.41,42 A Phase III clinical trial showed that 11 infusions of agalsidase beta at a dose of 1 mg/kg over a 20-week period safely and effectively cleared the abnormalities in the capillary endothelium of the kidneys, heart, and skin of patients with classic Fabry's disease.42 Kidney capillary endothelial cells were (nearly) completely cleared of Gb3 within 98% of patients in the study. In contrast to endothelial cells, podocytes, arterial smooth muscle cells and to a lesser extent, distal tubular epithelial cells in the kidney are more resistant to ERT and only partially clear from GL-3 or it takes longer duration (compared to endothelial cells) to completely clear them from GL-3 inclusions.43,44,45 The efficacy of ERT in clearing podocytes from GL-3 inclusions appears to be dose-dependent.45,46,47 Thus, 0.2 mg/kg every other week agalsidase alfa or doses less than 1 mg/kg every other week agalsidase beta may not be enough to clear podocytes from GL-3 inclusions.45,46,47

Data also shows that early facilitation of long-term treatment with agalsidase beta can preserve kidney function patients with Fabry disease.48 Thus, long term administration of agalsidase beta in patient with less than 0.5 g/g urine protein creatinine ratio and/or less than 50% global glomerulosclerosis on biopsy preserved GFR, while this did not halt progressive GFR decline in those with more than 0.5 g/day proteinuria and/or 50% or more global glomerulosclerosis on biopsy. A study by Tøndel et al indicates that early treatment with ERT at 1 mg/kg every other week may partially to completely clear podocytes from GL3 inclusions in young patients and reduce albuminuria.49 Transient mild-to-moderate infusion reactions (e.g., rigors, fever/chills) was found to occur in ~60% of patients, which may diminish over time.42 Reducing the infusion rate, administering preventive medications (i.e., diphenhydramine, steroids, acetaminophen), or both measures controlled these reactions.41,42

ACEI or ARBs in combination with ERT was shown to decrease the rate of proteinuria, if ERT was initiated at a younger age and urine protein to creatinine ratio (UPCR) was maintained at or below 0.5 g/g with antiproteinuric therapy.50 ERT alone, in the absence of ACEIs or ARBs has not been shown to substantially decrease proteinuria in Fabry patients.50

Tables 4 and 5 outline recommendations for the initiation of pediatric and adult patients with Fabry disease.51,52 The decision to initiate ERT should be based on the full range of available diagnostic tests and a thorough dialogue with patients and/or their families regarding the implications of treatment.

Table 5: Recommendations for initiation of ERT in adult male and female patients with classic or later onset mutations of GLA, variants of unknown significance (GLA VUS)*

A number of therapeutic alternatives for Fabry disease have been undergoing investigation, including chaperones, substrate reduction therapy (SRT), stem cell transplant, and gene therapy.10 Migalastat hydrochloride is an oral pharmacologic chaperone that binds to and stabilizes specific mutant forms of alpha-galactosidase facilitating trafficking to lysosomes. In pre-clinical studies, migalastat has been shown to reduce the storage of GL-3 in vitro and in vivo (Fabry transgenic mice).54,55,56 In humans, 6 months treatment with migalastat has been shown to reduce GL-3 accumulation in kidney peritubular capillary endothelial cells and in podocytes.57,58 In August 2018, migalastat received US Food and Drug Administration (FDA) approval for the treatment of adults with Fabry disease who have a genetic mutation determined to be responsive ("amenable") to treatment based on in vitro assay data.