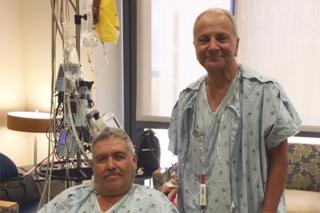 Economist and college professor James Doti, PhD, did the cost benefit analysis and decided that a healthy 72-year-old man who runs marathons and climbs mountains doesn’t need two kidneys and there are too many people in the world who need one.
In his analysis, it made sense that he donate a kidney, even though he didn’t personally know anyone who was in need. It wasn’t the first time that Dr. Doti, who is known in his Orange County, CA, community for being a caring educator and renaissance man, took up the cause of another human being. He has had a storied reputation for making a difference in many people’s lives for dozens of years at Chapman University, where he currently teaches and was once the longtime president.
But, his idea to give up an organ to a complete stranger did cause concern in his family, and some members believed he had finally gone too far.
“My daughter thought I was crazy,” Dr. Doti said. “I cited the numbers and statistics about the safety and told them there was no real risk, but they still thought I was kind of crazy. Except my wife, she was supportive.”
So, in March of 2019, Dr. Doti was rolled into UCI Health Transplant center after months of testing and donated one of his kidneys. It was decided by the center that Dr. Doti’s gift of life would be transplanted into a 52-year-old man.
“After the surgery, I was asked if I wanted to meet the person,” Dr. Doti said. “Of course, I did. His daughter walked in and just hugged me and wouldn’t let go. Whatever sacrifice I made was small and it was worth it.”
The recipient was a father of two and grandfather who had been on dialysis for a decade. He couldn’t work, and his quality of life was strained. Today, as a result of Dr. Doti’s gift, he is healthy. As it turned out, the man had a choice to accept or reject the altruistic donation from a senior citizen, Dr. Doti said. “When he found out I was a marathon runner that made up his mind.”
The two men have since become friends and are now training to run a half marathon together in March of 2020, which happens to be National Kidney Month.
Dr. Doti, who has run about 60 full marathons and 60 half marathons since he took up the hobby about 20 years ago, wants other marathon runners to be inspired to become kidney donors, too.
He wants other runners to donate.
“I’m promoting that runners my age become donors,” Dr. Doti said. “They are healthy. They have lived their lives, and why not do this. I want more than anything else for others to make this gift for their fellow human beings. It takes just one kidney to give someone back their life.”
Two weeks after he made the kidney donation, Dr. Doti was back on his feet and ran a 5K race. A month later, he ran a half marathon, he said.
He is now just beginning to talk about what he has done. His experience inspired the transplant center as well where he was first rejected as a candidate because of his age.
Recently, he found out that three older people have started the testing process at UCI Health, exactly what he hoped.
Living donors accounted for 6,442 kidney donations in 2018, according to the United Network of Organ Sharing (UNOS). About 100,000 people are waiting for a kidney transplant and sadly, an average of 12 people die every day waiting for a kidney, according to UNOS.
Kidney transplants become necessary when a patient’s kidneys fail to work to the degree that it can no longer filter the toxins from the body. Dialysis is the only other alternative treatment than a transplant and is a time-consuming and challenging treatment.
The National Kidney Foundation offers a platform called THE BIG ASK: THE BIG GIVE where people can learn how to become a living donor.