Love in the Time of Dialysis 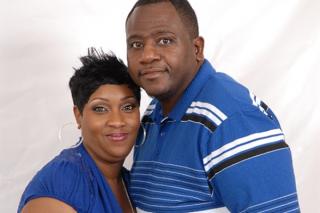 When shortness of breath led to a week-long hospitalization in 2011, Felicia Curry was shocked. She had been diagnosed with high blood pressure 10 years prior, but never really thinking it was that serious, she took her prescribed medications inconsistently. Over the years, high blood pressure took its toll, destroying Felicia’s kidneys and ultimately landing her in the hospital.

The medical team told her that she would need to go on dialysis. While a tough diagnosis to swallow, Felicia says, “I took it in stride because I know that I played a role in it. By not taking my high blood pressure medications regularly, I contributed to my kidney failure, and in order to survive I needed to accept responsibility and seek treatment.”

Felicia’s positive attitude and determination to live in the moment, instead of dwelling on the “should’ve, would’ve, could’ves,” made her fast friends with many at her hemodialysis center, including the staff.

One day at dialysis, she noticed an unfamiliar man receiving treatment on the other side of the room. According to Felicia, “I had never seen him before, but he immediately caught my eye.” Determined to find out more information, she teamed up with a dialysis technician named Stephanie with whom she was friendly, to ask some questions about this new, attractive gentleman.

Felicia’s first order of business: determining whether he was romantically available. After she and Stephanie determined that he was single, a determined Felicia sauntered over to her romantic prospect to introduce herself.

As the saying goes, the rest is history. Felicia and Reginald have been inseparable ever since and were married this January, a year to the date of their fateful first meeting.

Felicia attributes their compatibility and chemistry, not only to their personalities, but to their mutual understanding of what it’s like to want to thrive and lead a normal life while managing a chronic health condition.

Felicia says, “We have a true partnership that isn’t based on traditional gender roles. For example, if one of us is tired or not in the mood to cook or clean, the other will pitch in. I’m a big believer in that there’s someone for everyone, and for me, Reggie is my soul mate. We support one another in a way that neither of us needs to pretend to be something that we’re not.”

In the end, love truly does conquer all.