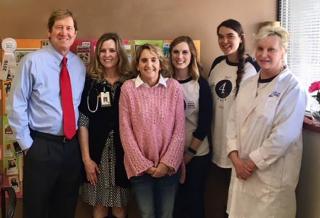 By Erin Moynihan, NKF volunteer
Laurie is a single mom of two kids. She holds a Master’s degree from Hamline University, and has spent nineteen years in a career in Human resources management. She also has chronic kidney disease.
While she’s always been a busy woman, in June in 2008 her schedule completely changed when she was diagnosed with kidney disease after a routine physical. Now she goes to dialysis three days a week, and is on the kidney transplant list. Her biggest challenges in dealing with kidney disease include a new time consuming schedule, the side effects of dialysis such as nausea and fatigue, and the unknown of how she will feel each day. Like many people who have gone on dialysis, things have changed for her, she says it has been a grieving process, but her outlook is a lot different now. “With any illness you go through the stages of grief, it’s normal. Now I look at this as a blessing.”
Laurie hasn’t just sat around being sad or frustrated about her situation. After being on dialysis for four and a half years, Laurie has faced the many challenges of dialysis while being a resource to many others with kidney disease. Laurie joined a dialysis support group and three years ago she stepped up to a new role as leader, after the previous leader left. Laurie now organizes meetings, selects with topics and speakers, serves as a point of contact for new members, and coordinates social events. The members of this group include a variety of patients: pre-dialysis, on dialysis, transplant recipients, and caregivers. This group hopes to expand their group and do outreach to inform and support others with kidney disease. Laurie now she sees CKD as a blessing. “I wouldn’t be where I am, be who I am, have met the people I’ve met, or helped the people I’ve helped, if it weren’t for this disease. So, that’s how I’ve learned to cope with it. You get there when you get there with acceptance, and then doing good with what you’ve been given.”
In addition to her work with the support group, Laurie also volunteers as an advocate, and educates people about CKD at community events. Laurie even met with Representative Jason Lewis and showed him around her dialysis center (see picture).
Laurie’s CKD support group meets on the third Thursday of each month, from 12:30-2pm, at Vision Loss Resources (215 Starkey Street, St. Paul, MN 55107). Contact Laurie at lchurch68@yahoo.com if you’re interested in attending or if you have questions.