Kidney Donation: Finding the Courage to Ask for Help 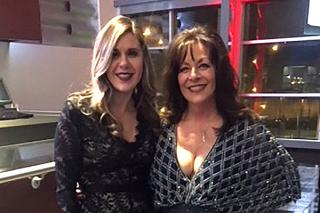 Kidney patient Cindy Stein, 52, was sick and close to death. The former professional dancer and real estate agent was bedridden and couldn’t pick up her head. Polycystic kidney disease had caused kidney failure.
For months, daily peritoneal dialysis kept her alive but gave her no quality of life. She was attached to a dialysis machine for seven hours a day. She was in intense pain and felt drained.  She cried every day. Cindy was on the waiting list for a kidney from a deceased donor. She wasn’t optimistic. Yet, dying on dialysis was still better, she thought, then raising her hand and telling the world her greatest “weakness” – that she needed a kidney.
“I didn’t even want to tell people I was sick,” she said. Her husband, her brother-in-law, and dozens of friends, family and strangers, weren’t going to allow that outcome. Neither was another stranger, Cherie Peters, program director of the National Kidney Foundation Serving the Alleghenies. Cindy’s husband, Brian Stein, started researching everything he could and came across a post about THE BIG ASK: THE BIG GIVE, a program at the National Kidney Foundation (NKF) to teach patients how to let their community know they need a kidney from a living donor.

Overcoming fear was the first hurdle

Still, Cindy didn’t want to let anyone know her condition. “I was so hesitant,” she said. “How would I begin to ask someone to donate a body part to me? Besides, I knew how to persevere through anything, on my own.” Her family tried to convince her for weeks to learn about the program to no avail, until one day her husband said something that triggered her change of mind.
He asked her: “Don’t you want a future with me?”  That did it for Cindy. She gave her husband the go-ahead to learn more about THE BIG ASK: THE BIG GIVE. The NKF program is just a couple of years old and includes direct patient and caregiver support, access to online communities, an advocacy campaign, and a multi-media public awareness campaign. All the resources are free. Brian Stein reached out to NKF Serving the Alleghenies and to Cherie Peters.

The Steins let their friends and family know

Within a few weeks, the Steins held a “Kidney for Cindy” event. About 130 people from their community came and listened to Peters’ emotional presentation about living kidney donation. Cindy’s neighbor, also a kidney patient who had leaned on Cindy over the years, gave a speech that moved everyone to tears. “I know that Cindy won’t ask you to give her a kidney, but I will,” her neighbor told the crowd. “She saved my life, now you can save hers.”
Ten people signed up that night to get tested as potential donors. For various medical reasons, one by one, nearly all dropped from the list. Cindy began to accept that she might die from the disease after all.

The family gathered at Thanksgiving to surprise her. Her brother-in-law, Dr. Jonathan Stein, turned out to be a match, and was cleared to give his kidney to his brother’s wife. In December, Dr. Stein gave Cindy a kidney.
“I tell my mother-in-law ‘your youngest son married me and is the love of my life, and your older son saved my life and gave his little brother his wife back’,” Cindy said. After the surgery, both Cindy and her brother-in-law are doing very well, though she said it was a difficult surgery. “We are both changed for the better,” she said. “I’ve learned that there are so many good people in the world who just want to help. I will spend the rest of my life being grateful and with a new level of happiness. It changed my brother-in-law too. He is so happy, and I think proud, that he could help.”
The support that came from the community shocked Cindy. She got cards in the mail from people she didn’t even know, and strangers were willing to give her a kidney. She realized that she gave something to the list of potential donors too - the opportunity to come to the aide of another human being in a big way. She knows now that is a special gift.

Grateful for THE BIG ASK: THE BIG GIVE

She cries when she talks about Cherie and NKF. “She was in contact with us in a loving and supportive way along the way. The whole team at NKF, Alleghanies followed me from A to Z. They are the only reason why I am sitting here today.”
Cindy encourages all patients with failing kidneys to go through THE BIG ASK: THE BIG GIVE program and let people in their lives know that they need help. “It will not only change your life, it will change the donor’s life, too,” she said.
For more information about THE BIG ASK: THE BIG GIVE, visit www.kidney.org/livingdonation