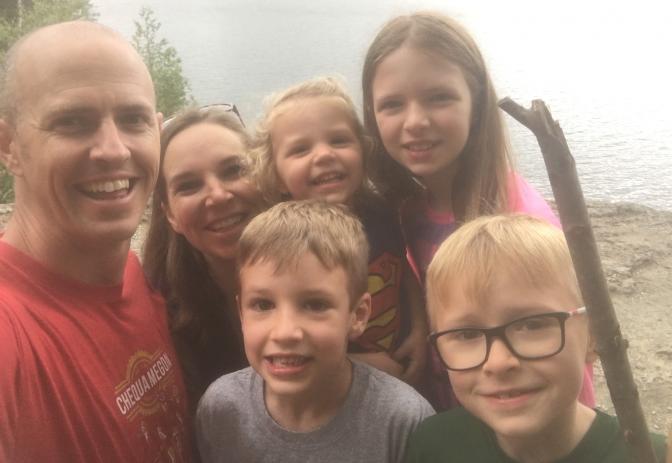 For Ann Gentry, mother of four kids (ages ten and under) life is full. Like many, she and her husband are managing the kick-off of a new COVID-school year with hybrid learning. But unlike many, they are managing another challenge that goes unseen—their youngest daughter’s kidney disease.

At twenty weeks into her pregnancy, Ann’s doctor discovered an abnormality in the size of her baby’s kidneys via ultrasound. The medical team told her that only a small percentage of similar cases result in ongoing kidney problems.

Soon after the birth of her daughter, however, doctors discovered that one of her kidneys had minimal function, and a kidney transplant might be necessary soon. Frequent ultrasound appointments to monitor their baby girl’s kidneys became part of the routine, and they learned to associate fevers with emergency room visits to safeguard their daughter’s functioning kidney. Because one kidney does all the work for Ann’s almost three-year-old daughter, they call it her “super kidney.”

Without a history of Cystic Kidney Disease in the family, Ann started from scratch to learn more. Living nearby the National Kidney Foundation office in Roseville, Ann noted the office sign, looked up NKF online, and reached out. She is glad she did. Instead of going down the rabbit hole with Dr. Google, (which Ann avoids because “even a paper cut leads to death online”) Ann accessed a supportive community with reliable information.

That’s where her family discovered the NKF Orange Party, which has become a joyful event for the entire family. Ann’s heart expanded when she met other committed families with children on dialysis, transplant lists, or monitoring transplant medications. Taking comfort in the knowledge that she wasn’t alone, Ann gained perspective and gratitude, and after collecting many uplifting stories—she accumulated hope.

Thankfully, the estimated timeline for her daughter’s future transplant was extended considerably. Her blonde-haired, hazel-eyed “ray of sunshine,” as Ann lovingly calls her, might not need a new kidney until well into adulthood. So Ann moves positively forward and lives in the wait-and-see mode. Her daughter’s kidney function is closely monitored at annual appointments. And Ann’s older boys, now savvy to ultrasounds and the importance of healthy kidneys, tag along for the outings.

Today, as Ann enthusiastically participates in Advocacy Day at the Minnesota Captiol to lend her voice to support the Living Donor Protection Act, she holds her daughter in her arms, and states, “This little girl is why I’m here.” In the vast Minnesota state capitol, Ann’s singular voice speaks volumes.

She hopes her daughter never needs a transplant, but her eyes are wide open to the struggles of many Americans who do. So, as Ann advocates for them all, she continues to gain heartwarming inspiration from the kidney community.

Today, Ann describes her youngest daughter as a merry girl that shines as “the little family mascot.” If you saw her playing soccer or tag outside with her older siblings or cheerfully singing along with The Okee Dokee Brothers, you would never know that she lives with cystic kidney disease.

But Ann and her husband know that living with their daughter’s kidney disease has strengthened their family. Ann’s perspective and faith pull her forward. As her daughter lives with a “super kidney,” Ann, a super mom, appreciates that every day they are not in a doctor’s office or emergency room is a good day. She sums it up like this, “Every healthy day is a blessing.”