Working to Get All Patients with Diabetes Tested for Kidney Disease 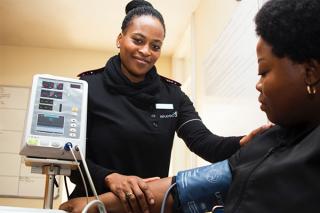 We know that when kidney disease is diagnosed in the early stages, the patient has the best chance of managing the illness and living without its serious complications. But too often this silent disease goes undetected until it’s too late.

Now, thanks to a new evaluation protocol, called a HEDIS measure, which brings attention to the National Kidney Foundation guidelines for CKD testing, patients with diabetes can expect their primary care physicians to test for kidney disease more routinely.

Making the test part of your routine

Diabetes is the most common risk factor for kidney disease. Even though the tests for kidney disease and diagnosis are inexpensive and widely available, people with diabetes often do not receive them. Thanks to months of work and our partnership with the National Committee on Quality Assurance (NCQA), the new HEDIS measure, will help understand how many adults with diabetes, who received both blood and urine kidney tests within the last 12 months, were diagnosed with kidney disease.

Why is this change necessary?

“We know measures work, in terms of accountability,” said Dr. Mary Barton, VP of Performance Measure at NCQA. “They give health plans and providers a focal point for improvement. This measure will ultimately lead to better care and improved kidney health across the country.”

Early testing is our best hope of catching kidney disease before it advances to the later, more dire stages, and slowing the progression of the illness. There are millions of Americans living with kidney disease and every effort in this fight is critical.