You’re going to do what? 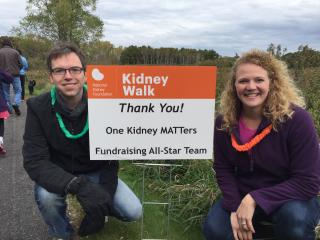 By Christi Krautbauer, NKF Board Member
In October 2011, my friend Matt’s life was turned upside down when he found out that he was in kidney failure and needed to start dialysis immediately. I had a one-year-old daughter and was pregnant with my son when Matt received his diagnosis. So the idea of donating a kidney to him wasn’t really an option.
But my husband and I found other ways to help Matt. As we talked to Matt, he let us know that the kidney diet was a huge burden. Always being so careful about what he ate, and being very restricted in where he could eat out meant he had to cook very carefully planned meals for himself all the time.
Well that was a problem we could solve! So Matt came over to our house once a week and we figured out how to cook delicious dinners that didn’t include a lot of phosphorous, sodium or potassium. The foods we all probably enjoy like tomatoes or whole grains became off-limits, and we replaced them with lots of protein and things like bell peppers instead of tomatoes. We learned how to use other seasonings to make up for the lack of salt. And we had a ton of fun cooking together!
Over the next year and half, Matt slowly got sicker. He was exhausted from dialysis, frustrated by not finding a donor, and generally becoming less and less like himself. It was awful to watch.
When our son was born in January of 2012, my husband and I decided that if Matt didn’t have a donor by the time Gil was 1 year old, I’d get tested. As his first birthday got closer, I started the process to find out if I would be a good match. I did this pretty quietly – my husband was the only person I could tell because I figured everyone else would think I was crazy.
I mean, what mother of two young children voluntarily signs up for a surgery that has no obvious benefit to her own health?
Well, one that is watching her friend slowly die and knew she had the ability to keep him alive.
So over the next few months, I went through the rigorous testing process including the blood typing, cross match, and physical and psychological exams. When the U of M finally determined that I would be eligible to donate, the social worker even called me one more time to tell me that no one would think less of me if I decided not to donate.
But my husband and I both strongly believed this was the right thing to do, and I had an amazing support network in place. My parents were around to help, and my in-laws even moved in with us for two weeks after the surgery to take care of our little kids while I healed.
So on April 18, 2013, I was able to change Matt’s life. Dialysis was keeping him alive, but a new kidney gave him a chance to really experience life again.
The question I got most often after the surgery was “Why would you take the risk?” I guess to me it didn’t really seem like a risk. I could continue to watch my friend die, or I could give him my extra kidney. To be honest, it wasn’t really even a question.
Now, four years after our surgery we’re both doing really well. In fact, I’ve actually had another kiddo since the surgery, and we’re all totally healthy. I have never for a moment regretted donating my kidney to Matt, and it’s so good to see him living a full life again!