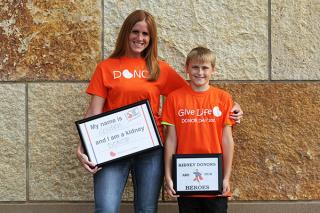 By Kristen Fuller, kidney donor and NKF volunteer
When did you donate?
I donated my kidney on June 8th, 2017
Who did you donate to? How do you know them?
I chose to donate non-directly. I learned that the recipient is a 42 year old woman from Virginia. She had a willing donor, but due to not being a match, their kidney ended up going to another recipient in Florida.
What led you to be a donor?
In the summer of 2016, I learned that a friend had recently been diagnosed with CKD. Though early in the diagnosis, it led me to research the impacts CKD has on individuals, the prognosis, quality of life, and reality that despite treatments to help slow the process, the individual’s kidneys will eventually fail them – requiring dialysis and/or a transplant. Additionally, as I completed my first labs, I had learned that a relative had started dialysis. Though it was temporary, learning more about the process, pain, time, and concerns, all the more reaffirmed my decision.
Where did you go for more information about donation?
I googled “what is CKD?” and “what is dialysis?” From there, I gathered the information I needed to start the process of becoming a living donor. I went to the NKF’s website to further educate myself and learn about the experiences from past donors and recipients’ point of view.
What was the hardest part about donation? What helped you get through it?
As a non-directed donor, the hardest part was convincing my family that it was a good idea to give a physical part of myself to a stranger. They were concerned to say the least, as I am a single mother, living on a single income, and it is an “unnecessary” procedure.
Think about that statement… Unnecessary procedure. Would any of the 100,000+ individuals that are on the waiting list for a kidney consider it to be an “unnecessary” treatment? When there are only roughly 9,000 deceased donor kidneys available for transplant a year. An average of 12 people die every day, while waiting and hoping for a kidney.
I heard all the typical questions and opinions about the risks. However, because I’d thoroughly studied living donation, dialysis, and individuals that require a transplant, I never came across an objection that I could not wholeheartedly dispute with my reasons for donating. To the real stubborn/hard to understand folks, I’d compare my decision with anyone who so bravely goes into the military. Do we challenge or question them? No, we have a basic understanding that they want to protect and serve. They want to defend our (as an American) basic rights. They put themselves physically, mentally, and emotionally at risk of situations that without experiencing firsthand, we cannot fully comprehend. For me, I can read all about reasons for why someone would need a kidney, I can educate myself all about dialysis and everything else that is associated with treatments and prognosis – but I will never fully comprehend the extent of the individual going through it. I won’t ever have the constraints of dialysis. So, all I can do is be grateful that I had two functioning kidneys. And give one to someone else, so that their quality of life could be improved, and they no longer would need dialysis.
How are you doing now?
I am doing great and have been since I came out of surgery. I resumed activities, (such as walking in the community), the day after I came home from the hospital. I started jogging again, after two weeks, and returned to work after seven weeks off.
What is one piece of advice you might give to someone thinking about donation? To someone looking for a kidney?
If you are considering donating, consider the following: Do you have a support system? Start educating yourself and have conversations with them. After a few weeks of letting the information digest, my family supported me and even if they never fully understood, encouragement/support is always a good feeling to have. If you don’t have a strong support system, I would be more than happy to take on that role!
Second, are you active? By active, I don’t mean in such a manner that it is your whole life. However, with activity, your body is used to repairing itself (after a workout, running, moving, etc.) I feel that being a more active person before transplant, greatly benefitted me and reduced the time it took for my body to physically recover from the surgery. My son said that being able to be home with me, during my recovery, was the best summer he’s ever had.  We did a lot of activities that allowed for me to walk and move around, but there were also several days we never changed out of pajamas.
Third, there is a financial component. I knew for a year that this was happening. I saved money, knowing that I would only receive one week of paid leave, (as per Minnesota Law –employers with 20+ employees are required to pay at minimum of one week of leave), but check with your employer’s HR department, some may offer more. Additionally, I had a short term disability policy that allowed for some pay during my leave. I also used around 35 hours of paid leave that I had stored, (average of one hour/day that I was gone).
What do you want the world to know about organ donation?
I can’t even describe the feelings I have had about the experience. It has been so positive. I learned things about myself and my body – that I previously took for granted. I didn’t consider the “gains” I would have, but it can be overwhelming!